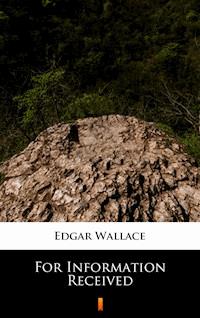 One of the most prolific writers of the twentieth century, Edgar Wallace was an immensely popular author, who created exciting thrillers spiced with tales of treacherous crooks and hard-boiled detectives. In total Wallace is credited with over 170 novels, almost 1,000 short stories, and 18 stage plays. This comprehensive work presents a collection of nine short stories, primarily detective fiction of Edgar Wallace. These are largely adventure narratives with elements of crime or mystery, and usually combine a bombastic sensationalism with hammy violence. The stories are well written and definitely a product of their time and place.

I. FOR INFORMATION RECEIVED

V. A PRIESTESS OF OSIRIS

IX. THE EAR OF THE SANCTUARY

I. FOR INFORMATION RECEIVED

IN the days of his youth, long before he so much as dreamt of millions, Mr. Roy Emmet Grayson had asked a chance-met boy to carry his bag from one railway station to another, offering him, as a reward, a sum so large that, had the boy been blessed with intelligence, might have set him wondering why his benefactor did not hire a cab. And at the end of the journey he had dismissed the lad with a cuff, and might have got away with his conspiracy to defraud but for the intervention of a large-sized policeman.

Grayson made his money that way; in the fortunate absence of policemen at the crucial moments of his high-class larcenies. Seldom did his signature appear in binding documents: it was his boast that his word was his bond, and his favourite saying was, “You can leave it to me…. I’ll see you right.”

Most people believed him, only to discover that, their services ended, his memory failed to function.

Norma Brayle, his niece and secretary, knew him rather well, and gained her knowledge by successive jars, which rather shook her faith in human nature. Once she had protested….

“Listen,” said Mr. Grayson, pointing the wet end of his cigar at her, “you’ve got a good job, haven’t you? I keep you, I feed you, I pay you real money. Want to lose it? Want to go back to the girls’ hostel and tout work in the City? You don’t!”

“No, Mr. Grayson,” she said, a little pale at the prospect.

“Well, see nothing, hear nothing, and say nothing. That’s what you’re paid for. And get that uncle and niece idea out of your head. You’re my secretary, and when I die, the only difference it will make to you will be that you’ll be short of a salary.”

She hated him and was afraid of him–that was before she met Johnny Westall. And she would never have met Johnny but for the fact that Mr. Grayson left her in Paris for a whole week whilst he was in Madrid, fixing his new iron company.

Johnny was wonderful. He was an engineer, a metallurgist, and a dancing partner of supreme merit. He had the most glorious grey-blue eyes and a smile that was altogether adorable. And he was romantically poor, because he was a young engineer with ideas that old engineers were loth to accept.

Mr. Grayson came back from Madrid, flushed with success, for he had manoeuvred a concession without binding himself to giving any quid pro quo, and that kind of contract was his ideal.

He did not meet Johnny, but Norma spoke about him, timidly and with a grand attempt at indifference.

Mr. Grayson grunted. He was by nature suspicious, and never grudged time or money to prove that his suspicions were justified, but on this occasion he merely said: “Shut up! I’ve got something else to think about than your dam’d dancing partners,” and there the matter ended. A day or so later, when he was lunching at the Embassy, he heard about Johnny Westall as an engineer, and at the moment did not identify him as his secretary’s friend.

One morning, many months later, Mr. Roy Grayson finished the dictation of a letter, and said:

“I’m sending him to Russia. Some new platinum deposits have been found in the Urals. We have got the Russian Government’s permission. It will be a fine thing for him, if the report is a good one….”

She did not ask what would happen if it was bad–good or bad, the result would be very much the same. There was little need for Mr. Grayson to take her into his confidence. In the privacy of her room she found a letter that had come by the morning post.

“…I wish I could have met him, dear–he seems to be a very decent fellow. The allowance for expenses is good, and his agent (who made the arrangement after he had spoken to Grayson on the ‘phone) says that, although Mr. Grayson has fixed no salary, I can depend upon his doing the right thing. This is the biggest chance I have had, and when I come back I know a dear little flat in Knightsbridge that is mine for the asking.”

Norma sighed. She was cursed with the instinct for loyalty, or Johnny Westall would know the value of her relative’s promise. Yet, there was a chance, in this case….

Johnny had been gone three months, and only one letter had come to her and to her employer…there followed an interval of nine weeks’ silence.

Mr. Grayson, with American engagements to fulfil, fumed angrily. It never occurred to him that his niece might have heard.

“What the devil he is doing I don’t know!” he snarled. “I’m leaving for America on Wednesday, and not a line! This comes of employing a waster who thinks more of his infernal dancing…he’s in some pretty Moscow dance hall wasting my money…”

In reality he did not think this: in his soul was a growing suspicion that maddened him. There were other seekers after platinum in Russia. Men could be bought–his head swum with fury as he contemplated the bare possibility.

Then one morning came a wire from Berlin.

“Arriving Wednesday,” and nothing more.

“Arriving Wednesday! And not a word about whether he has found anything!” he raged. “The dog I He knows I am leaving England on Wednesday–”

“He wouldn’t willingly miss his bonus,” She said, watching him, and he exploded.

“Bonus! Good God! do you imagine that I’m waiting for that! I never promised him a bonus anyway. He’s had the experience at my expense, and he’ll be lucky to get anything more.”

On the Tuesday night, Roy Emmet Grayson left his sitting-room at the Ritz-Carlton Hotel and strolled out to the Embankment to cool off.

“And who the devil are you?” demanded Mr. Grayson, not without annoyance.

The shabby apparition that confronted him, so suddenly that it seemed to have risen from the earth, chuckled. How shabby he was, the night mercifully hid. Grayson saw only a squat figure and the red glow of a burning cigar, but then his eyes were not yet accustomed to the darkness.

“My name,” said the other amusedly, “is Caston–P. B. Caston–suggest anything?”

“It suggests printing machines to me,” replied the millionaire, “but as I am not a printer–”

The cigar waved gracefully in the protesting hand of the other.

“I am hardly likely to hold you up outside the Ritz-Carlton to sell you a printing press,” he said. “Fortunately, it is so dark that you cannot see me, otherwise you would probably hand me over to the police. For I am a most unprepossessing tramp. I have a four days’ beard, my shoes are gaping at the toes, and my trousers are held up by a rope belt.”

Grayson was interested–so interested that he forgot for the first time the irritation which had possessed him all that day.

“What is it?” he asked briskly. “A hard luck story? You were a schoolfellow of mine at Vermont–you were ruined by speculating in my Iron Syndicate–your wife played hockey with my sister–or is it a new one you are trying to put over?”

“Wrong!” he said triumphantly. “I’ve never seen you until to-day. I don’t want to borrow anything, and I’ve never speculated a penny in any of your wild-cat corporations. I merely offer you my services.”

The millionaire smiled in the night.

“Shoot, Felix,” he said, for him good-humouredly.

The other pulled at his cigar.

“This afternoon you offered the Western Route Steamship Company a fabulous sum if they would postpone the sailing of the Carpathania. The ship leaves for New York to-morrow and you’re anxious to cross by her–stop me if I’m wrong–but it is necessary that you should meet one John Westall, who is on his way from Russia and cannot possibly reach London until to-morrow, after the Carpathania has sailed.”

Grayson listened with growing wonder at this very accurate recital of the situation.

“How do you know this?” he demanded suspiciously.

“Write me down head of the English Secret Service,” said its owner easily; “call me Little Willie Pinkerton, the Boy Sleuth from Baker Street. Read this.”

He produced from somewhere a sheet of paper. Mr. Grayson walked to a lamp-post and began reading. It was in Westall’s writing and was the first part of a report–the very report on the very property he had been commissioned to make for Grayson.

“Where did you get this?” he demanded. “And where is the rest of it–the report leaves off before…before…”

“Exactly–before it starts in to report,” said the man complacently. “Now the question is, not how I came to get this–I’ve just returned from Russia–but whether you will pay me for the remainder. One thing I can tell you: this is your chance of getting the first reading of Westall’s interesting statement.”

“You mean, if I don’t buy it from you, he will sell it elsewhere–the swine!”

“Swine or hog or human, it is a matter of indifference to me,” said the stranger. “Do you buy?”