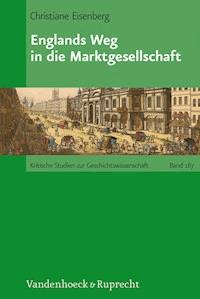 Using England as a example, this volume reconstructs the century-long process of commercialization that eventually brought forth the modern market economy. It reveals the circumstances under which certain types of markets – for land, capital and jobs as well as exploitation rights – arose during medieval times, and how social contacts were created and shaped by those markets in early modern times. Another topic concerns the regulatory and control functions emanating from these markets, for example, the stock market, the Bank of England and Lloyds of London. Also the communication among the many protagonists in this story as well as their approach to the uncertainty and risks involved in the different marketplaces are discussed.The findings of the study reveal that the process of the commercialization of the economy, society and culture in England did not lead directly to the industrial society, as previously postured, but rather to the service society. From this result Christiane Eisenberg considers the low overall vitality of the English economy even beyond the period of time studied to be one of its most characteristic attributes. At the same time, she points out the uniqueness of the English example and warns against generalizing her results. The process of commercialization began on the European continent not only later than in England; it was to develop under completely different conditions.The study is concerned with English history from the Norman Conquest in 1066 up to the beginning of the 19th century. It serves to fill the neglected gap in the classical literature of economic history concerning the growth of market economy and reveals new perspectives for a reinterpretation of the development of Western society.