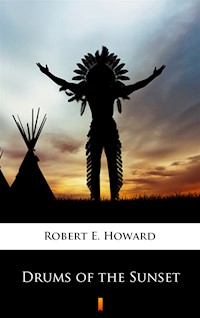 Drums of the Sunset ebook

Drums of Sunset was published in eight parts. Steve and Hard Luck, his newfound companion (or is he? The curious should check those back issues linked above!), are hot on the trail of a host of criminals ranging from ‘Navajoes’ to a ring of counterfeiters. Pieces of the mystery that have plagued Steve for six installments are starting to come together. And oh, the CLIFFHANGER! Steve and Hard Luck are locked in mortal combat with a rowdy group of Native Americans.

“Now, come all you punchers, and listen to my tale, “When I tell you of troubles on the Chisholm Trail!”

STEVE HARMER was riding Texas-fashion, slow and easy, one knee hooked over the saddle horn, hat pulled over his brows to shade his face. His lean body swayed rhythmically to the easy gait of his horse.

The trail he was following sloped gradually upward, growing steeper as he continued. Cedars flanked the narrow path, with occasional pinons and junipers. Higher up, these gave place to pines.

Looking back, Steve could see the broad level country he had left, deeply grassed and sparsely treed. Beyond and above, the timbered slopes of the mountains frowned. Peak beyond peak, pinnacle beyond pinnacle they rose, with great undulating slopes between, as if piled by giants.

Suddenly behind the lone rider came the clatter of hoofs. Steve pulled aside to let the horsemen by, but they came to a halt beside him. Steve swept off his broad-brimmed hat.

There were two of the strangers, and one was a girl. To Steve she seemed strangely out of place, somehow, in this primitive setting. She sat her horse in an unfamiliar manner and her whole air was not of the West. She wore an Eastern riding habit–and then Steve forgot her clothes as he looked at her face. A vagrant curl, glinting gold in the sun, fell over her white forehead and from beneath this two soft grey eyes looked at him. Her full lips were half parted–

“Say, you!” a rough voice jarred Steve out of his daydreams.

The girl’s companion was as characteristically Western as she was not. He was a heavily built man of middle life, thickly bearded and roughly clad. His features were dark and coarse, and Steve noted the heavy revolver which hung at his hip.

This man spoke in a harsh, abrupt manner.

“Who’re you and where do you reckon you’re goin’?”

Steve stiffened at the tone. He shot a glance at the girl, who seemed rather pale and frightened.

“Yeah?” the bearded lips parted in a wolfish grin. “I reckon, stranger, you done lost your way–you shoulda took that trail back yonder a ways that branched off to the south.”

“I ain’t said where I was goin’,” Steve responded, nettled. “Maybe I have reason for goin’ this way.”

“That’s what I’m thinkin’,” the bearded man answered, and Steve sensed the menacing note in his voice. “But you may have reason for takin’ the other trail yet. Nobody lives in these hills, and they don’t like strangers! Be warned, young feller, and don’t git into somethin’ you don’t know nothin’ about.”

And while Steve gaped at him, not understanding, the man flung a curt order to the girl, and they both sped off up the trail, their horses laboring under the stress of quirt and spur. Steve watched in amazement.

“By golly, they don’t care how they run their broncs uphill. What do you reckon all that rigamarole meant? Maybe I oughta taken the other trail, at that–golly, that was a pretty girl!”

The riders disappeared on the thickly timbered slope and Steve, after some musing, nudged his steed with his knee and started on.

Crack! A sharp report cut through the melody of his lazy song. A flash of fire stabbed from among trees further up the slope. Steve’s hat flew from his head, his horse snorted and reared, nearly unseating his rider.

Steve whirled his steed, dropping off on the far side. His gun was in his hand as he peered cautiously across his saddle in the direction from which the shot had come. Silence hovered over the tree-masked mountain side and no motion among the intertwining branches betrayed the presence of the hidden foe.

At last Steve cautiously stepped from behind his horse. Nothing happened. He sheathed his gun, stepped forward and recovered his hat, swearing as he noted the neat hole through the crown.

“Now did that whiskered galoot stop up there some place and sneak back for a crack at me?” he wondered. “Or did he tell somebody else to–or did that somebody else do it on their own idea? And what is the idea? What’s up in them hills that they don’t want seen? And was this sharpshooter tryin’ to kill me or just warn me?”

He shook his head and shrugged his shoulders.

“Anyway,” he meditated as he mounted, “I reckon that south trail is the best road, after all.”

THE south branch, he found, led down instead of up, skirting the base of the incline. He sighted several droves of sheep, and as the sun sank westward, he came upon a small cabin built near a running stream of clear water.

“Hi yah! Git down and set!” greeted the man who came to the door.

He was a small, wizened old fellow, remarkably bald, and he seemed delighted at the opportunity for conversation which Steve’s coming afforded. But Steve eyed him with a suspicious glance before he dismounted.

“My name is Steve Harmer,” said Steve abruptly. “I’m from Texas and I’m just passin’ through. If you hone for me to ride on, just say so and they won’t be no need for slingin’ lead at me.”

“Heh, heh!” laughed the old fellow. “Son, I kin read yore brand! You done fell in with my neighbors of the Sunset Mountains!”

“A tough lookin’ hombre and a nice lookin’ girl,” admitted Steve. “And some fellow who didn’t give his name, but just ruined my best hat.”

“Light!” commanded the old man. “Light and hobble yore bronc. This ain’t no hotel, but maybe you can struggle along with the accommodations. My name is ... ‘Hard Luck Harper,’ and I aim to live up to that handle. You ain’t by no chance got no corn juice in them saddle bags?”

“No, I ain’t,” answered Steve, dismounting.

“I was afeard not,” sighed the old man. “Hard Luck I be to the end–come in–I smell that deer meat a- burnin’.”

After a supper of venison, sourdough bread and coffee, the two sat on the cabin stoop and watched the stars blink out as they talked. The sound of Steve’s horse, cropping the luxuriant grass, came to them, and a night breeze wafted the spicy scents of the forest.

“This country is sure different from Texas,” said Steve. “I kinda like these mountains, though. I was figurin’ on campin’ up among ‘em tonight, that’s why I took that west trail. She goes on to Rifle Pass, don’t she?”

“She don’t,” replied the old man. “Rifle Pass is some south of here and this is the trail to that small but thrivin’ metropolis. That trail you was followin’ meanders up in them hills and where she goes, nobody knows.”