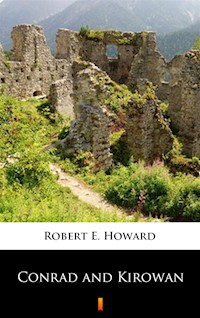 Professor John Kirowan is a fictional character from Robert E. Howard’s contributions to H.P. Lovecraft’s story cycle „the Cthulhu Mythos”. Kirowan is often partnered with the character John Conrad, to the extent that these stories are often referred to under the group title Conrad & Kirowan. Professor Kirowan is a younger son of a titled Irish family and a scholar of the Mythos who travelled widely in search of forbidden knowledge. His ancestor, Sir Michael Kirowan was a medieval knight famous for killing a particularly fierce and notorious villain, whose ghost Kirowan will meet and escape from.

THE THING ON THE ROOF

THE HAUNTER OF THE RING

THERE were, I remember, six of us in Conrad’s bizarrely fashioned study, with its queer relics from all over the world and its long rows of books which ranged from the Mandrake Press edition of Boccaccio to a Missale Romanum, bound in clasped oak boards and printed in Venice, 1740. Clemants and Professor Kirowan had just engaged in a somewhat testy anthropological argument: Clemants upholding the theory of a separate, distinct Alpine race, while the professor maintained that this so-called race was merely a deviation from an original Aryan stock–possibly the result of an admixture between the southern or Mediterranean races and the Nordic people.

“And how,” asked Clemants, “do you account for their brachycephalicism? The Mediterraneans were as long-headed as the Aryans: would admixture between these dolichocephalic peoples produce a broad-headed intermediate type?”

“Special conditions might bring about a change in an originally long- headed race,” snapped Kirowan. “Boaz has demonstrated, for instance, that in the case of immigrants to America, skull formations often change in one generation. And Flinders Petrie has shown that the Lombards changed from a long- headed to a round-headed race in a few centuries.”

“But what caused these changes?”

“Much is yet unknown to science,” answered Kirowan, “and we need not be dogmatic. No one knows, as yet, why people of British and Irish ancestry tend to grow unusually tall in the Darling district of Australia–Cornstalks, as they are called–or why people of such descent generally have thinner jaw-structures after a few generations in New England. The universe is full of the unexplainable.”

“And therefore the uninteresting, according to Machen,” laughed Taverel.

Conrad shook his head. “I must disagree. To me, the unknowable is most tantalizingly fascinating.”

“Which accounts, no doubt, for all the works on witchcraft and demonology I see on your shelves,” said Ketrick, with a wave of his hand toward the rows of books.

And let me speak of Ketrick. Each of the six of us was of the same breed –that is to say, a Briton or an American of British descent. By British, I include all natural inhabitants of the British Isles. We represented various strains of English and Celtic blood, but basically, these strains are the same after all. But Ketrick: to me the man always seemed strangely alien. It was in his eyes that this difference showed externally. They were a sort of amber, almost yellow, and slightly oblique. At times, when one looked at his face from certain angles, they seemed to slant like a Chinaman’s.

Others than I had noticed this feature, so unusual in a man of pure Anglo- Saxon descent. The usual myths ascribing his slanted eyes to some pre-natal influence had been mooted about, and I remember Professor Hendrik Brooler once remarked that Ketrick was undoubtedly an atavism, representing a reversion of type to some dim and distant ancestor of Mongolian blood–a sort of freak reversion, since none of his family showed such traces.

But Ketrick comes of the Welsh branch of the Cetrics of Sussex, and his lineage is set down in the Book of Peers. There you may read the line of his ancestry, which extends unbroken to the days of Canute. No slightest trace of Mongoloid intermixture appears in the genealogy, and how could there have been such intermixture in old Saxon England? For Ketrick is the modern form of Cedric, and though that branch fled into Wales before the invasion of the Danes, its male heirs consistently married with English families on the border marches, and it remains a pure line of the powerful Sussex Cedrics–almost pure Saxon. As for the man himself, this defect of his eyes, if it can be called a defect, is his only abnormality, except for a slight and occasional lisping of speech. He is highly intellectual and a good companion except for a slight aloofness and a rather callous indifference which may serve to mask an extremely sensitive nature.

Referring to his remark, I said with a laugh: “Conrad pursues the obscure and mystic as some men pursue romance; his shelves throng with delightful nightmares of every variety.”

True; historians and chronicles are often dull; tale-weavers never –the masters, I mean. A voodoo sacrifice can be described in such a dull manner as to take all the real fantasy out of it, and leave it merely a sordid murder. I will admit that few writers of fiction touch the true heights of horror–most of their stuff is too concrete, given too much earthly shape and dimensions. But in such tales as Poe’s Fall of the House of Usher, Machen’s Black Seal and Lovecraft’s Call of Cthulhu –the three master horror-tales, to my mind–the reader is borne into dark and outer realms of imagination.

“But look there,” he continued, “there, sandwiched between that nightmare of Huysmans’, and Walpole’s Castle of Otranto–Von Junzt’s Nameless Cults. There’s a book to keep you awake at night!”

“I’ve read it,” said Taverel, “and I’m convinced the man is mad. His work is like the conversation of a maniac–it runs with startling clarity for awhile, then suddenly merges into vagueness and disconnected ramblings.”

Conrad shook his head. “Have you ever thought that perhaps it is his very sanity that causes him to write in that fashion? What if he dares not put on paper all he knows? What if his vague suppositions are dark and mysterious hints, keys to the puzzle, to those who know?”

“Bosh!” This from Kirowan. “Are you intimating that any of the nightmare cults referred to by Von Junzt survive to this day–if they ever existed save in the hag-ridden brain of a lunatic poet and philosopher?”

“Not he alone used hidden meanings,” answered Conrad. “If you will scan various works of certain great poets you may find double meanings. Men have stumbled onto cosmic secrets in the past and given a hint of them to the world in cryptic words. Do you remember Von Junzt’s hints of ‘a city in the waste’? What do you think of Flecker’s line:”

‘Pass not beneath! Men say there blows in stony deserts still a rose

But with no scarlet to her leaf–and from whose heart no perfume flows.’

“Men may stumble upon secret things, but Von Junzt dipped deep into forbidden mysteries. He was one of the few men, for instance, who could read the Necronomicon in the original Greek translation.”

Taverel shrugged his shoulders, and Professor Kirowan, though he snorted and puffed viciously at his pipe, made no direct reply; for he, as well as Conrad, had delved into the Latin version of the book, and had found there things not even a cold-blooded scientist could answer or refute.

“Well,” he said presently, “suppose we admit the former existence of cults revolving about such nameless and ghastly gods and entities as Cthulhu, Yog Sothoth, Tsathoggua, Gol-goroth, and the like, I can not find it in my mind to believe that survivals of such cults lurk in the dark corners of the world today.”

To our surprise Clemants answered. He was a tall, lean man, silent almost to the point of taciturnity, and his fierce struggles with poverty in his youth had lined his face beyond his years. Like many another artist, he lived a distinctly dual literary life, his swashbuckling novels furnishing him a generous income, and his editorial position on The Cloven Hoof affording him full artistic expression. The Cloven Hoof was a poetry magazine whose bizarre contents had often aroused the shocked interest of the conservative critics.

“You remember Von Junzt makes mention of a so-called Bran cult,” said Clemants, stuffing his pipe-bowl with a peculiarly villainous brand of shag tobacco. “I think I heard you and Taverel discussing it once.”

“As I gather from his hints,” snapped Kirowan, “Von Junzt includes this particular cult among those still in existence. Absurd.”

Again Clemants shook his head. “When I was a boy working my way through a certain university, I had for roommate a lad as poor and ambitious as I. If I told you his name, it would startle you. Though he came of an old Scotch line of Galloway, he was obviously of a non-Aryan type.

“This is in strictest confidence, you understand. But my roommate talked in his sleep. I began to listen and put his disjointed mumbling together. And in his mutterings I first heard of the ancient cult hinted at by Von Junzt; of the king who rules the Dark Empire, which was a revival of an older, darker empire dating back into the Stone Age; and of the great, nameless cavern where stands the Dark Man–the image of Bran Mak Morn, carved in his likeness by a master-hand while the great king yet lived, and to which each worshipper of Bran makes a pilgrimage once in his or her lifetime. Yes, that cult lives today in the descendants of Bran’s people–a silent, unknown current it flows on in the great ocean of life, waiting for the stone image of the great Bran to breathe and move with sudden life, and come from the great cavern to rebuild their lost empire.”

“And who were the people of that empire?” asked Ketrick.