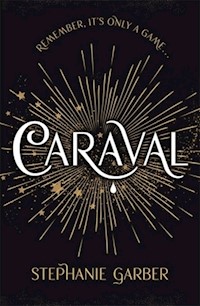 Welcome to Caraval, where nothing is quite what it seems. Scarlett has never left the tiny isle of Trisda, pining from afar for the wonder of Caraval, a once-a-year week-long performance where the audience participates in the show. Caraval is Magic. Mystery. Adventure. And for Scarlett and her beloved sister Tella it represents freedom and an escape from their ruthless, abusive father. When the sisters’ long-awaited invitations to Caraval finally arrive, it seems their dreams have come true. But no sooner have they arrived than Tella vanishes, kidnapped by the show’s mastermind organiser, Legend. Scarlett has been told that everything that happens during Caraval is only an elaborate performance. But nonetheless she quickly becomes enmeshed in a dangerous game of love, magic and heartbreak. And real or not, she must find Tella before the game is over, and her sister disappears forever. With Caraval, Stephanie Garber spins a spellbinding tale of sisterhood, love and betrayal. Like her characters, I lost myself in the dangerous, enchanting world she created-and never wanted to come out. -- Sabaa Tahir, author of New York Times bestseller Ember In the Ashes Enchanting and mysterious, Stephanie Garber’s Caraval is a story rich with sumptuous detail, beautifully written. -- Renee Ahdieh, New York Times No.1 bestselling author of The Wrath and the Dawn In a book where nothing is at it appears, one thing is certain: Caraval is the darkly enchanting adventure you’ve been looking for! -- Kiersten White, New York Times bestselling author of Paranormalcy and And I Darken Intoxicating. Darkly magical. Caraval walks the knife-edge between fantasy and reality. Within mere pages, I gladly lost myself in this perfect labyrinth of a plot. Stephanie Garber doesn’t just dazzle-she makes me believe. -- Jodi Meadows, author of The Incarnate Trilogy and The Orphan Queen A tale of sisterly devotion painted in colors of cerise and shimmering gold. If you ever wondered how it would feel to step into a living dream, here’s your ticket. -- Stacey Lee, author of Under a Painted Sky and Outrun the Moon A decadent and enchanting tale. Caraval will sink its teeth into you, and you will not want to leave. -- Roshani Chokshi, New York Times bestselling author of The Star-Touched Queen Caraval shimmers with magic. This is an inventive, delightful tale with several aces up its sleeve. -- Marie Rutkoski, New York Times bestselling author of the Winner’s Trilogy [A] magnificent debut novel ... intriguing characters, an imaginative setting, and evocative writing combine to create a spellbinding tale of love, loss, sacrifice, and hope. Publishers Weekly I love this novel ... It’s a thing of beauty and the stuff of dreams. -- Cecelia Ahern Like the Carousel of Roses at the heart of the party, the language is colourful, giddy and with the occasional barb. And like a fairy story, Caraval reveals dark truths behind a playful, glittering surface. Daily Mail