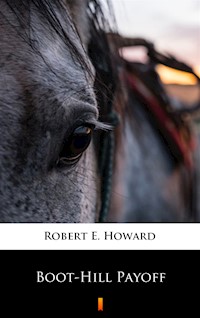 San Leon lay as if slumbering in the desert heat as the five brothers rode up to the doors of the Cattlemen’s Bank. None noted their coming; the Red Lode saloon, favorite rendezvous for the masculine element of San Leon, stood at the other end of the town, and out of sight around a slight bend in the street.

FIVE men were riding down the winding road that led to San Leon, and one was singing, in a toneless monotone:

“Shut up! Shut up!” It was the youngest of the riders who ripped out like that. A lanky, tow-headed kid, with a touch of pallor under his tan, and a rebellious smolder in his hot eyes.

The biggest man of the five grinned.

“Bucky’s nervous,” he jeered genially. “You don’t want to be no derned bandit, do you, Bucky?”

The youngest glowered at him.

“That welt on yore jaw ought to answer that, Jim,” he growled.

“You fit like a catamount,” agreed Big Jim placidly. “I thought we’d never git you on yore cayuse and started for San Leon, without knockin’ you in the head. ‘Bout the only way you show yo’re a Laramie, Bucky, is in the handlin’ of yore fists.”

“T’ain’t no honor to be a Laramie,” flared Bucky. “You and Luke and Tom and Hank has dragged the name through slime. For the last three years you been worse’n a pack of starvin’ lobos–stealin’ cattle and horses; robbin’ folks–why, the country’s near ruint. And now yo’re headin’ to San Leon to put on the final touch–robbin’ the Cattlemen’s Bank, when you know dern well the help the ranchmen got from that bank’s been all that kept ‘em on their feet. Old man Brown’s stretched hisself nigh to the bustin’ p’int to help folks.”

He gulped and fought back tears that betrayed his extreme youth. His brothers grinned tolerantly. “It’s the last time,” he informed them bitterly. “You won’t git me into no raid again!”

“It’s the last time for all of us,” said Big Jim, biting off a cud of tobacco. “We’re through after this job. We’ll live like honest men in Mexico.”

“Serve you right if a posse caught us and hanged us all,” said Bucky viciously.

“Not a chance.” Big Jim’s placidity was unruffled. “Nobody but us knows the trail that follows the secret waterholes acrost the desert. No posse’d dare to foller us. Once out of town and headed south for the border, the devil hisself couldn’t catch us.”

“I wonder if anybody’ll ever stumble onto our secret hide-out up in the Los Diablos Mountains,” mused Hank.

“I doubt it. Too well hid. Like the desert trail, nobody but us knows them mountain trails. It shore served us well. Think of all the steers and horses we’ve hid there, and drove through the mountains to Mexico! And the times we’ve laid up there laughin’ in our sleeves as the posse chased around a circle.”

Bucky muttered something under his breath; he retained no fond memories of that hidden lair high up in the barren Diablos. Three years before, he had reluctantly followed his brothers into it from the little ranch in the foothills where Old Man Laramie and his wife had worn away their lives in futile work. The old life, when their parents lived and had held their wild sons in check, had been drab and hard, but had lacked the bitterness he had known when cooking and tending house for his brothers in that hidden den from which they had ravaged the countryside. Four good men gone bad–mighty bad.

San Leon lay as if slumbering in the desert heat as the five brothers rode up to the doors of the Cattlemen’s Bank. None noted their coming; the Red Lode saloon, favorite rendezvous for the masculine element of San Leon, stood at the other end of the town, and out of sight around a slight bend in the street.

No words were passed; each man knew his part beforehand. The three elder Laramies slid lithely out of their saddles, throwing their reins to Bucky and Luke, the second youngest. They strode into the bank with a soft jingle of spurs and creak of leather, closing the door behind them.

Luke’s face was impassive as an image’s, as he dragged leisurely on a cigarette, though his eyes gleamed between slitted lids. But Bucky sweated and shivered, twisting nervously in his saddle. By some twist of destiny, one son had inherited all the honesty that was his parents’ to transmit. He had kept his hands clean. Now, in spite of himself, he was scarred with their brand.

He started convulsively as a gun crashed inside the bank; like an echo came another reverberation.

Luke’s Colt was in his hand, and he snatched one foot clear of the stirrup, then feet pounded toward the street and the door burst open to emit the three outlaws. They carried bulging canvas sacks, and Hank’s sleeve was crimson.

“Ride like hell!” grunted Big Jim, forking his roan. “Old Brown throwed down on Hank. Old fool! I had to salivate him permanent.”

And like hell it was they rode, straight down the street toward the desert, yelling and firing as they went. They thundered past houses from which startled individuals peered bewilderedly, past stores where leathery faced storekeepers were dragging forth blue-barreled scatter-guns. They swept through the futile rain of lead that poured from the excited and befuddled crowd in front of the Red Lode, and whirled on toward the desert that stretched south of San Leon.

But not quite to the desert. For as they rounded the last bend in the twisting street and came abreast of the last house in the village, they were confronted by the gray-bearded figure of old “Pop” Anders, sheriff of San Leon County. The old man’s gnarled right hand rested on the ancient single-action Colt on his thigh, his left was lifted in a seemingly futile command to halt.

Big Jim cursed and sawed back on the reins, and the big roan slid to a halt.

“Robbed the bank this time, eh?” he said in cold fury, his eyes on the canvas sacks. “Likely spilt blood, too. Good thing Frank Laramie died before he could know what skunks his boys turned out to be. You ain’t content to steal our stock till we’re nigh bankrupt; you got to rob our bank and take what little money we got left for a new start. Why, you damned human sidewinders!” the old man shrieked, his control snapping suddenly. “Ain’t there nothin’ that’s too low-down for you to do?”

Behind them sounded the pound of running feet and a scattering banging of guns. The crowd from the Red Lode was closing in.

“You’ve wasted our time long enough, old man!” roared Luke, jabbing in the spurs and sending his horse rearing and plunging toward the indomitable figure. “Git outa the way, or–”

The old single-action jumped free in the gnarled hand. Two shots roared together, and Luke’s sombrero went skyrocketing from his head. But the old sheriff fell face forward in the dust with a bullet through his heart, and the Laramie gang swept on into the desert, feeding their dust to their hurriedly mounted and disheartened pursuers.

Only young Buck Laramie looked back, to see the door of the last house fly open, and a pig-tailed girl run out to the still figure in the street. It was the sheriff’s daughter, Judy. She and Buck had gone to the same school in the old days before the Laramies hit the wolf-trail. Buck had always been her champion. Now she went down on her knees in the dust beside her father’s body, seeking frantically for a spark of life where there was none.

A red film blazed before Buck Laramie’s eyes as he turned his livid face toward his brothers.

“Hell,” Luke was fretting, “I didn’t aim to salivate him permanent. The old lobo woulda hung everyone of us if he could of–but just the same I didn’t aim to kill him.”

Something snapped in Bucky’s brain.