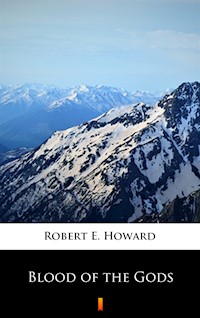 Blood of the Gods ebook

”I have known many gods. He who denies them is as blind as he who trusts them too deeply. I seek not beyond death. It may be the blackness averred by the Nemedian skeptics, or Crom’s realm of ice and cloud, or the snowy plains and vaulted halls of the Nordheimer’s Valhalla. I know not, nor do I care. Let me live deep while I live; let me know the rich juices of red meat and stinging wine on my palate, the hot embrace of white arms, the mad exultation of battle when the blue blades flame and crimson, and I am content. Let teachers and philosophers brood over questions of reality and illusion. I know this: if life is illusion, then I am no less an illusion, and being thus, the illusion is real to me. I live, I burn with life, I love, I slay, and am content.”

I. A SHOT THROUGH THE WINDOW

II. THE ABODES OF EMPTINESS

III. THE FIGHT AT THE WELL OF AMIR KHAN

IV. THE DJINN OF THE CAVES

VI. THE DEVIL OF THE NIGHT

I. A SHOT THROUGH THE WINDOW

IT was the wolfish snarl on Hawkston’s thin lips, the red glare in his eyes, which first roused terrified suspicion in the Arab’s mind, there in the deserted hut on the outskirts of the little town of Azem. Suspicion became certainty as he stared at the three dark, lowering faces of the other white men, bent toward him, and all beastly with the same cruel greed that twisted their leader’s features.

The brandy glass slipped from the Arab’s hand and his swarthy skin went ashy.

“Lah!” he cried desperately. “No! You lied to me! You are not friends –you brought me here to murder me–”

He made a convulsive effort to rise, but Hawkston grasped the bosom of his gumbaz in an iron grip and forced him down into the camp chair again. The Arab cringed away from the dark, hawk-like visage bending close to his own.

“You won’t be hurt, Dirdar,” rasped the Englishman. “Not if you tell us what we want to know. You heard my question. Where is Al Wazir?”

The beady eyes of the Arab glared wildly up at his captor for an instant, then Dirdar moved with all the strength and speed of his wiry body. Bracing his feet against the floor, he heaved backward suddenly, toppling the chair over and throwing himself along with it. With a rending of worn cloth the bosom of the gumbaz came away in Hawkston’s hand, and Dirdar, regaining his feet like a bouncing rubber ball, dived straight at the open door, ducking beneath the pawing arm of the big Dutchman, Van Brock. But he tripped over Ortelli’s extended leg and fell sprawling, rolling on his back to slash up at the Italian with the curved knife he had snatched from his girdle. Ortelli jumped back, yowling, blood spurting from his leg, but as Dirdar once more bounced to his feet, the Russian, Krakovitch, struck him heavily from behind with a pistol barrel.

As the Arab sagged to the floor, stunned, Hawkston kicked the knife out of his hand. The Englishman stooped, grabbed him by the collar of his abba, and grunted: “Help me lift him, Van Brock.”

The burly Dutchman complied, and the half-senseless Arab was slammed down in the chair from which he had just escaped. They did not tie him, but Krakovitch stood behind him, one set of steely fingers digging into his shoulder, the other poising the long gun-barrel.

Hawkston poured out a glass of brandy and thrust it to his lips. Dirdar gulped mechanically, and the glassiness faded out of his eyes.

“He’s coming around,” grunted Hawkston. “You hit him hard, Krakovitch. Shut up, Ortelli! Tie a rag about your bally leg and quit grousing about it! Well, Dirdar, are you ready to talk?”

The Arab looked about like a trapped animal, his lean chest heaving under the torn gumbaz. He saw no mercy in the flinty faces about him.

“Let’s burn his cursed feet,” snarled Ortelli, busy with an improvised bandage. “Let me put the hot irons to the swine–”

Dirdar shuddered and his gaze sought the face of the Englishman, with burning intensity. He knew that Hawkston was leader of these lawless men by virtue of sharp wits and a sledge-like fist.

The Arab licked his lips.

“As Allah is my witness, I do not know where Al Wazir is!”

“You lie!” snapped the Englishman. “We know that you were one of the party that took him into the desert–and he never came back. We know you know where he was left. Now, are you going to tell?”

“American,” snapped Hawkston. “Adventurer. Real name’s Gordon. He led the caravan that took Al Wazir into the desert. Dirdar, you needn’t fear El Borak. We’ll protect you from him.”

A new gleam entered the Arab’s shifty eyes; avarice mingled with the fear already there. Those beady eyes grew cunning and cruel.

“There is only one reason why you wish to find Al Wazir,” he said. “You hope to learn the secret of a treasure richer than the secret hoard of Shahrazar the Forbidden! Well, suppose I tell you? Suppose I even guide you to the spot where Al Wazir is to be found–will you protect me from El Borak–will you give me a share of the Blood of the Gods?”

Hawkston frowned, and Ortelli ripped out an oath.