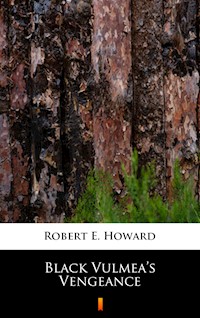 Pulp adventure, seemingly a bit crude and dashed off quickly, but good storytelling none the less. Pirates and lost cities – a bit of ’Pirates of the Caribbean’ and ’Indiana Jones’ rolled into one, but also with echoes of one of Howard’s best known tales of piracy, the Conan story ’Queen of the Black Coast’ – a superior story. The writing here is okay, entertaining enough, and even manages a little character exposition, but Howard could do and did do better work.

OUT of the Cockatoo’s cabin staggered Black Terence Vulmea, pipe in one hand and flagon in the other. He stood with booted legs wide, teetering slightly to the gentle lift of the lofty poop. He was bareheaded and his shirt was open, revealing his broad hairy chest. He emptied the flagon and tossed it over the side with a gusty sigh of satisfaction, then directed his somewhat blurred gaze on the deck below. From poop ladder to forecastle it was littered by sprawling figures. The ship smelt like a brewery. Empty barrels, with their heads stove in, stood or rolled between the prostrate forms. Vulmea was the only man on his feet. From galley-boy to first mate the rest of the ship’s company lay senseless after a debauch that had lasted a whole night long. There was not even a man at the helm.

But it was lashed securely and in that placid sea no hand was needed on the wheel. The breeze was light but steady. Land was a thin blue line to the east. A stainless blue sky held a sun whose heat had not yet become fierce.

Vulmea blinked indulgently down upon the sprawled figures of his crew, and glanced idly over the larboard side. He grunted incredulously and batted his eyes. A ship loomed where he had expected to see only naked ocean stretching to the skyline. She was little more than a hundred yards away, and was bearing down swiftly on the Cockatoo, obviously with the intention of laying her alongside. She was tall and square-rigged, her white canvas flashing dazzlingly in the sun. From the maintruck the flag of England whipped red against the blue. Her bulwarks were lined with tense figures, bristling with boarding-pikes and grappling irons, and through her open ports the astounded pirate glimpsed the glow of the burning matches the gunners held ready.

“All hands to battle-quarters!” yelled Vulmea confusedly. Reverberant snores answered the summons. All hands remained as they were.

“Wake up, you lousy dogs!” roared their captain. “Up, curse you! A king’s ship is at our throats!”

His only response came in the form of staccato commands from the frigate’s deck, barking across the narrowing strip of blue water.

Cursing luridly he lurched in a reeling run across the poop to the swivel-gun which stood at the head of the larboard ladder. Seizing this he swung it about until its muzzle bore full on the bulwark of the approaching frigate. Objects wavered dizzily before his bloodshot eyes, but he squinted along its barrel as if he were aiming a musket.

“Strike your colors, you damned pirate!” came a hail from the trim figure that trod the warship’s poop, sword in hand.

“Go to hell!” roared Vulmea, and knocked the glowing coals of his pipe into the vent of the gun-breech. The falcon crashed, smoke puffed out in a white cloud, and the double handful of musket balls with which the gun had been charged mowed a ghastly lane through the boarding party clustered along the frigate’s bulwark. Like a clap of thunder came the answering broadside and a storm of metal raked the Cockatoo’s decks, turning them into a red shambles.

Sails ripped, ropes parted, timbers splintered, and blood and brains mingled with the pools of liquor spilt on the decks. A round shot as big as a man’s head smashed into the falcon, ripping it loose from the swivel and dashing it against the man who had fired it. The impact knocked him backward headlong across the poop where his head hit the rail with a crack that was too much even for an Irish skull. Black Vulmea sagged senseless to the boards. He was as deaf to the triumphant shouts and the stamp of victorious feet on his red-streaming decks as were his men who had gone from the sleep of drunkenness to the black sleep of death without knowing what had hit them.

Captain John Wentyard, of his Majesty’s frigate the Redoubtable, sipped his wine delicately and set down the glass with a gesture that in another man would have smacked of affectation. Wentyard was a tall man, with a narrow, pale face, colorless eyes, and a prominent nose. His costume was almost sober in comparison with the glitter of his officers who sat in respectful silence about the mahogany table in the main cabin.

“Bring in the prisoner,” he ordered, and there was a glint of satisfaction in his cold eyes.

They brought in Black Vulmea, between four brawny sailors, his hands manacled before him and a chain on his ankles that was just long enough to allow him to walk without tripping. Blood was clotted in the pirate’s thick black hair. His shirt was in tatters, revealing a torso bronzed by the sun and rippling with great muscles. Through the stern-windows, he could see the topmasts of the Cockatoo, just sinking out of sight. That close-range broadside had robbed the frigate of a prize. His conquerors were before him and there was no mercy in their stares, but Vulmea did not seem at all abashed or intimidated. He met the stern eyes of the officers with a level gaze that reflected only a sardonic amusement. Wentyard frowned. He preferred that his captives cringe before him. It made him feel more like Justice personified, looking unemotionally down from a great height on the sufferings of the evil.

“You are Black Vulmea, the notorious pirate?”

“I’m Vulmea,” was the laconic answer.

“I suppose you will say, as do all these rogues,” sneered Wentyard, “that you hold a commission from the Governor of Tortuga? These privateer commissions from the French mean nothing to his Majesty. You–”

“Save your breath, fish-eyes!” Vulmea grinned hardly. “I hold no commission from anybody. I’m not one of your accursed swashbucklers who hide behind the name of buccaneer. I’m a pirate, and I’ve plundered English ships as well as Spanish–and be damned to you, heron-beak!”

The officers gasped at this effrontery, and Wentyard smiled a ghastly, mirthless smile, white with the anger he held in rein.

“You know that I have the authority to hang you out of hand?” he reminded the other.

“I know,” answered the pirate softly. “It won’t be the first time you’ve hanged me, John Wentyard.”

“What?” The Englishman stared.

A flame grew in Vulmea’s blue eyes and his voice changed subtly in tone and inflection; the brogue thickened almost imperceptibly.

“On the Galway coast it was, years ago, captain. You were a young officer then, scarce more than a boy–but with all your ruthlessness fully developed. There were some wholesale evictions, with the military to see the job was done, and the Irish were mad enough to make a fight of it–poor, ragged, half-starved peasants, fighting with sticks against full-armed English soldiers and sailors. After the massacre and the usual hangings, a boy crept into a thicket to watch–a lad of ten, who didn’t even know what it was all about. You spied him, John Wentyard, and had your dogs drag him forth and string him up alongside the kicking bodies of the others. `He’s Irish,’ you said as they heaved him aloft. `Little snakes grow into big ones.’ I was that boy. I’ve looked forward to this meeting, you English dog!”

Vulmea still smiled, but the veins knotted in his temples and the great muscles stood out distinctly on his manacled arms. Ironed and guarded though the pirate was, Wentyard involuntarily drew back, daunted by the stark and naked hate that blazed from those savage eyes.

“How did you escape your just deserts?” he asked coldly, recovering his poise.