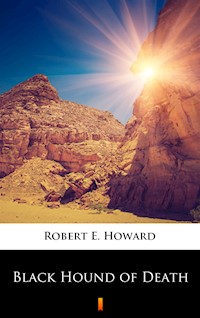 Some such thoughts flitted vaguely through my mind that night as I groped along the narrow trail that wound through the deep pinelands. Such thoughts are likely to keep company with any man who dares invade, in the night, that lonely stretch of densely timbered river-country which the black people call Egypt, for some obscurely racial reason.

I. THE KILLER IN THE DARK

IV. THE HOUND OF SATAN

I. THE KILLER IN THE DARK

EGYPTIAN darkness! The phrase is too vivid for complete comfort, suggesting not only blackness, but unseen things lurking in that blackness; things that skulk in the deep shadows and shun the light of day; slinking figures that prowl beyond the edge of normal life.

Some such thoughts flitted vaguely through my mind that night as I groped along the narrow trail that wound through the deep pinelands. Such thoughts are likely to keep company with any man who dares invade, in the night, that lonely stretch of densely timbered river-country which the black people call Egypt, for some obscurely racial reason.

There is no blackness this side of Hell’s unlighted abyss as absolute as the blackness of the pine woods. The trail was but a half-guessed trace winding between walls of solid ebony. I followed it as much by the instincts of the piney woods dweller as by the guidance of the external senses. I went as hurriedly as I dared, but stealth was mingled with my haste, and my ears were whetted to knife-edge alertness. This caution did not spring from the uncanny speculations roused by the darkness and silence. I had good, material reason to be wary. Ghosts might roam the pinelands with gaping, bloody throats and cannibalistic hunger as the Negroes maintained, but it was no ghost I feared. I listened for the snap of a twig under a great, splay foot, for any sound that would presage murder striking from the black shadows. The creature which, I feared, haunted Egypt was more to be dreaded than any gibbering phantom. That morning the worst Negro desperado in that part of the state had broken from the clutches of the law, leaving a ghastly toll of dead behind him. Down along the river, bloodhounds were baying through the brush and hard-eyed men with rifles were beating up the thickets.

They were seeking him in the fastnesses near the scattered black settlements, knowing that a Negro seeks his own kind in his extremity. But I knew Tope Braxton better than they did; I knew he deviated from the general type of his race. He was unbelievably primitive, atavistic enough to plunge into uninhabited wilderness and live like a blood-mad gorilla in solitude that would have terrified and daunted a more normal member of his race.

So while the hunt flowed away in another direction, I rode toward Egypt, alone. But it was not altogether to look for Tope Braxton that I plunged into that isolated fastness. My mission was one of warning, rather than search. Deep in the mazy pine labyrinth, a white man and his servant lived alone, and it was the duty of any man to warn them that a red-handed killer might be skulking about their cabin.

I was foolish, perhaps, to be traveling on foot; but men who wear the name of Garfield are not in the habit of turning back on a task once attempted. When my horse unexpectedly went lame, I left him at one of the Negro cabins which fringe the edge of Egypt, and went on afoot. Night overtook me on the path, and I intended remaining until morning with the man I was going to warn–Richard Brent. He was a taciturn recluse, suspicious and peculiar, but he could scarcely refuse to put me up for the night. He was a mysterious figure; why he chose to hide himself in a southern pine forest none knew. He had been living in an old cabin in the heart of Egypt for about six months.

Suddenly, as I forged through the darkness, my speculations regarding the mysterious recluse were cut short, wiped clear out of my mind. I stopped dead, the nerves tingling in the skin on the backs of my hands. A sudden shriek in the dark has that effect, and this scream was edged with agony and terror. It came from somewhere ahead of me. Breathless silence followed that cry, a silence in which the forest seemed to hold its breath and the darkness shut in more blackly still.

Again the scream was repeated, this time closer. Then I heard the pound of bare feet along the trail, and a form hurled itself at me out of the darkness. My revolver was in my hand, and I instinctively thrust it out to fend the creature off. The only thing that kept me from pulling the trigger was the noise the object was making–gasping, sobbing noises of fear and pain. It was a man, and direly stricken. He blundered full into me, shrieked again, and fell sprawling, slobbering and yammering.

“What the devil is it?” I demanded, my hair stirring on my scalp at the poignant agony in the gibbering voice.

The wretch recognized my voice; he clawed at my knees.