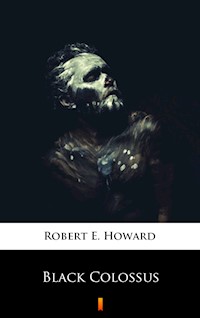 A powerful wizard named Thugra Khotan is awoken from his three-thousand year sleep by an audacious yet unlucky Zamoran thief named Shevatas. Thugra wakes with dreams of world domination. He assumes the name Natohk, the Veiled One, gathers an army of desert tribes and sets out to conquer the Hyborian nations.

ONLY the age-old silence brooded over the mysterious ruins of Kuthchemes, but Fear was there; Fear quivered in the mind of Shevatas, the thief, driving his breath quick and sharp against his clenched teeth.

He stood, the one atom of life amidst the colossal monuments of desolation and decay. Not even a vulture hung like a black dot in the vast blue vault of the sky that the sun glazed with its heat. On every hand rose the grim relics of another, forgotten age: huge broken pillars, thrusting up their jagged pinnacles into the sky; long wavering lines of crumbling walls; fallen cyclopean blocks of stone; shattered images, whose horrific features the corroding winds and dust-storms had half erased. From horizon to horizon no sign of life: only the sheer breathtaking sweep of the naked desert, bisected by the wandering line of a long-dry river course; in the midst of that vastness the glimmering fangs of the ruins, the columns standing up like broken masts of sunken ships–all dominated by the towering ivory dome before which Shevatas stood trembling.

The base of this dome was a gigantic pedestal of marble rising from what had once been a terraced eminence on the banks of the ancient river. Broad steps led up to a great bronze door in the dome, which rested on its base like the half of some titanic egg. The dome itself was of pure ivory, which shone as if unknown hands kept it polished. Likewise shone the spired gold cap of the pinnacle, and the inscription which sprawled about the curve of the dome in golden hieroglyphics yards long. No man on earth could read those characters, but Shevatas shuddered at the dim conjectures they raised. For he came of a very old race, whose myths ran back to shapes undreamed of by contemporary tribes.

Shevatas was wiry and lithe, as became a master-thief of Zamora. His small round head was shaven, his only garment a loin-cloth of scarlet silk. Like all his race, he was very dark, his narrow vulture-like face set off by his keen black eyes. His long, slender and tapering fingers were quick and nervous as the wings of a moth. From a gold-scaled girdle hung a short, narrow, jewel-hilted sword in a sheath of ornamented leather. Shevatas handled the weapon with apparently exaggerated care. He even seemed to flinch away from the contact of the sheath with his naked thigh. Nor was his care without reason.

This was Shevatas, a thief among thieves, whose name was spoken with awe in the dives of the Maul and the dim shadowy recesses beneath the temples of Bel, and who lived in songs and myths for a thousand years. Yet fear ate at the heart of Shevatas as he stood before the ivory dome of Kuthchemes. Any fool could see there was something unnatural about the structure; the winds and suns of three thousand years had lashed it, yet its gold and ivory rose bright and glistening as the day it was reared by nameless hands on the bank of the nameless river.

This unnaturalness was in keeping with the general aura of these devil-haunted ruins. This desert was the mysterious expanse lying southeast of the lands of Shem. A few days’ ride on camel-back to the southwest, as Shevatas knew, would bring the traveller within sight of the great river Styx at the point where it turned at right angles with its former course, and flowed westward to empty at last into the distant sea. At the point of its bend began the land of Stygia, the dark-bosomed mistress of the south, whose domains, watered by the great river, rose sheer out of the surrounding desert.

Eastward, Shevatas knew, the desert shaded into steppes stretching to the Hyrkanian kingdom of Turan, rising in barbaric splendor on the shores of the great inland sea. A week’s ride northward the desert ran into a tangle of barren hills, beyond which lay the fertile uplands of Koth, the southernmost realm of the Hyborian races. Westward the desert merged into the meadowlands of Shem, which stretched away to the ocean.

All this Shevatas knew without being particularly conscious of the knowledge, as a man knows the streets of his town. He was a far traveller and had looted the treasures of many kingdoms. But now he hesitated and shuddered before the highest adventure and the mightiest treasure of all.

In that ivory dome lay the bones of Thugra Khotan, the dark sorcerer who had reigned in Kuthchemes three thousand years ago, when the kingdoms of Stygia stretched far northward of the great river, over the meadows of Shem, and into the uplands. Then the great drift of the Hyborians swept southward from the cradle-land of their race near the northern pole. It was a titanic drift, extending over centuries and ages. But in the reign of Thugra Khotan, the last magician of Kuthchemes, gray-eyed, tawny-haired barbarians in wolfskins and scale-mail had ridden from the north into the rich uplands to carve out the kingdom of Koth with their iron swords. They had stormed over Kuthchemes like a tidal wave, washing the marble towers in blood, and the northern Stygian kingdom had gone down in fire and ruin.

But while they were shattering the streets of his city and cutting down his archers like ripe corn, Thugra Khotan had swallowed a strange terrible poison, and his masked priests had locked him into the tomb he himself had prepared. His devotees died about that tomb in a crimson holocaust, but the barbarians could not burst the door, nor ever mar the structure by maul or fire. So they rode away, leaving the great city in ruins, and in his ivory-domed sepulcher great Thugra Khotan slept unmolested, while the lizards of desolation gnawed at the crumbling pillars, and the very river that watered his land in old times sank into the sands and ran dry.

Many a thief sought to gain the treasure which fables said lay heaped about the moldering bones inside the dome. And many a thief died at the door of the tomb, and many another was harried by monstrous dreams to die at last with the froth of madness on his lips.

So Shevatas shuddered as he faced the tomb, nor was his shudder altogether occasioned by the legend of the serpent said to guard the sorcerer’s bones. Over all myths of Thugra Khotan hung horror and death like a pall. From where the thief stood he could see the ruins of the great hall wherein chained captives had knelt by the hundreds during festivals to have their heads hacked off by the priest-king in honor of Set, the Serpent-god of Stygia. Somewhere near by had been the pit, dark and awful, wherein screaming victims were fed to a nameless amorphic monstrosity which came up out of a deeper, more hellish cavern. Legend made Thugra Khotan more than human; his worship yet lingered in a mongrel degraded cult, whose votaries stamped his likeness on coins to pay the way of their dead over the great river of darkness of which the Styx was but the material shadow. Shevatas had seen this likeness, on coins stolen from under the tongues of the dead, and its image was etched indelibly in his brain.

But he put aside his fears and mounted to the bronze door, whose smooth surface offered no bolt or catch. Not for naught had he gained access into darksome cults, had harkened to the grisly whispers of the votaries of Skelos under midnight trees, and read the forbidden iron-bound books of Vathelos the Blind.