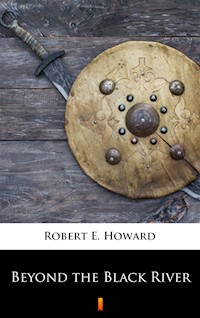 Beyond the Black River ebook

A young settler named Balthus walks blissfully unaware through a forest trail when the sound of combat draws his attention. He hides behind a tree and sees Conan step into the open, having just slain a Pictish robber who was about to ambush Balthus. Conan had been tracking the Pict for some hours, as he has been chasing the encroaching Picts on commission from nearby Fort Tuscelan.

I. CONAN LOSES HIS AX

II. THE WIZARD OF GWAWELA

III. THE CRAWLERS IN THE DARK

IV. THE BEASTS OF ZOGAR SAG

V. THE CHILDREN OF JHEBBAL SAG

VI. RED AXES OF THE BORDER

VII. THE DEVIL IN THE FIRE

I. CONAN LOSES HIS AX

THE stillness of the forest trail was so primeval that the tread of a soft-booted foot was a startling disturbance. At least it seemed so to the ears of the wayfarer, though he was moving along the path with the caution that must be practised by any man who ventures beyond Thunder River. He was a young man of medium height, with an open countenance and a mop of tousled tawny hair unconfined by cap or helmet. His garb was common enough for that country – a coarse tunic, belted at the waist, short leather breeches beneath, and soft buckskin boots that came short of the knee. A knife-hilt jutted from one boot-top. The broad leather belt supported a short, heavy sword and a buckskin pouch. There was no perturbation in the wide eyes that scanned the green walls which fringed the trail. Though not tall, he was well built, and the arms that the short wide sleeves of the tunic left bare were thick with corded muscle.

He tramped imperturbably along, although the last settler’s cabin lay miles behind him, and each step was carrying him nearer the grim peril that hung like a brooding shadow over the ancient forest.

He was not making as much noise as it seemed to him, though he well knew that the faint tread of his booted feet would be like a tocsin of alarm to the fierce ears that might be lurking in the treacherous green fastness. His careless attitude was not genuine; his eyes and ears were keenly alert, especially his ears, for no gaze could penetrate the leafy tangle for more than a few feet in either direction.

But it was instinct more than any warning by the external senses which brought him up suddenly, his hand on his hilt. He stood stock-still in the middle of the trail, unconsciously holding his breath, wondering what he had heard, and wondering if indeed he had heard anything. The silence seemed absolute. Not a squirrel chattered or bird chirped. Then his gaze fixed itself on a mass of bushes beside the trail a few yards ahead of him. There was no breeze, yet he had seen a branch quiver. The short hairs on his scalp prickled, and he stood for an instant undecided, certain that a move in either direction would bring death streaking at him from the bushes.

A heavy chopping crunch sounded behind the leaves. The bushes were shaken violently, and simultaneously with the sound, an arrow arched erratically from among them and vanished among the trees along the trail. The wayfarer glimpsed its flight as he sprang frantically to cover.

Crouching behind a thick stem, his sword quivering in his fingers, he saw the bushes part, and a tall figure stepped leisurely into the trail. The traveller stared in surprise. The stranger was clad like himself in regard to boots and breeks, though the latter were of silk instead of leather. But he wore a sleeveless hauberk of dark mesh-mail in place of a tunic, and a helmet perched on his black mane. That helmet held the other’s gaze; it was without a crest, but adorned by short bull’s horns. No civilized hand ever forged that head-piece. Nor was the face below it that of a civilized man: dark, scarred, with smoldering blue eyes, it was a face as untamed as the primordial forest which formed its background. The man held a broad-sword in his right hand, and the edge was smeared with crimson.

“Come on out,” he called, in an accent unfamiliar to the wayfarer. “All’s safe now. There was only one of the dogs. Come on out.”

The other emerged dubiously and stared at the stranger. He felt curiously helpless and futile as he gazed on the proportions of the forest man – the massive iron-clad breast, and the arm that bore the reddened sword, burned dark by the sun and ridged and corded with muscles. He moved with the dangerous ease of a panther; he was too fiercely supple to be a product of civilization, even of that fringe of civilization which composed the outer frontiers.

Turning, he stepped back to the bushes and pulled them apart. Still not certain just what had happened, the wayfarer from the east advanced and stared down into the bushes. A man lay there, a short, dark, thickly-muscled man, naked except for a loin-cloth, a necklace of human teeth and a brass armlet. A short sword was thrust into the girdle of the loin-cloth, and one hand still gripped a heavy black bow. The man had long black hair; that was about all the wayfarer could tell about his head, for his features were a mask of blood and brains. His skull had been split to the teeth.

“A Pict, by the gods!” exclaimed the wayfarer.

The burning blue eyes turned upon him.

“Why, they told me at Velitrium, and again at the settlers’ cabins along the road, that these devils sometimes sneaked across the border, but I didn’t expect to meet one this far in the interior.”

“You’re only four miles east of Black River,” the stranger informed him. “They’ve been shot within a mile of Velitrium. No settler between Thunder River and Fort Tuscelan is really safe. I picked up this dog’s trail three miles south of the fort this morning, and I’ve been following him ever since. I came up behind him just as he was drawing an arrow on you. Another instant and there’d have been a stranger in Hell. But I spoiled his aim for him.”

The wayfarer was staring wide eyed at the larger man, dumbfounded by the realization that the man had actually tracked down one of the forest devils and slain him unsuspected. That implied woodsmanship of a quality undreamed, even for Conajohara.

“You are one of the fort’s garrison?” he asked.

“I’m no soldier. I draw the pay and rations of an officer of the line, but I do my work in the woods. Valannus knows I’m of more use ranging along the river than cooped up in the fort.”

Casually the slayer shoved the body deeper into the thickets with his foot, pulled the bushes together and turned away down the trail. The other followed him.

“My name is Balthus,” he offered. “I was at Velitrium last night. I haven’t decided whether I’ll take up a hide of land, or enter fort service.”

“The best land near Thunder River is already taken,” grunted the slayer. “Plenty of good land between Scalp Creek–you crossed it a few miles back–and the fort, but that’s getting too devilish close to the river. The Picts steal over to burn and murder–as that one did. They don’t always come singly. Some day they’ll try to sweep the settlers out of Conajohara. And they may succeed–probably will succeed. This colonization business is mad, anyway. There’s plenty of good land east of the Bossonian marches. If the Aquilonians would cut up some of the big estates of their barons, and plant wheat where now only deer are hunted, they wouldn’t have to cross the border and take the land of the Picts away from them.”

“That’s queer talk from a man in the service of the governor of Conajohara,” objected Balthus.

“It’s nothing to me,” the other retorted. “I’m a mercenary. I sell my sword to the highest bidder. I never planted wheat and never will, so long as there are other harvests to be reaped with the sword. But you Hyborians have expanded as far as you’ll be allowed to expand. You’ve crossed the marches, burned a few villages, exterminated a few clans and pushed back the frontier to Black River; but I doubt if you’ll even be able to hold what you’ve conquered, and you’ll never push the frontier any further westward. Your idiotic king doesn’t understand conditions here. He won’t send you enough reinforcements, and there are not enough settlers to withstand the shock of a concerted attack from across the river.”

“But the Picts are divided into small clans,” persisted Balthus. “They’ll never unite. We can whip any single clan.”

“Or any three or four clans,” admitted the slayer. “But some day a man will rise and unite thirty or forty clans, just as was done among the Cimmerians, when the Gundermen tried to push the border northward, years ago. They tried to colonize the southern marches of Cimmeria: destroyed a few small clans, built a fort-town, Venarium–you’ve heard the tale.”

“So I have indeed,” replied Balthus, wincing. The memory of that red disaster was a black blot in the chronicles of a proud and warlike people. “My uncle was at Venarium when the Cimmerians swarmed over the walls. He was one of the few who escaped that slaughter. I’ve heard him tell the tale, many a time. The barbarians swept out of the hills in a ravening horde, without warning, and stormed Venarium with such fury none could stand before them. Men, women, and children were butchered. Venarium was reduced to a mass of charred ruins, as it is to this day. The Aquilonians were driven back across the marches, and have never since tried to colonize the Cimmerian country. But you speak of Venarium familiarly. Perhaps you were there?”

“I was,” grunted the other. “I was one of the horde that swarmed over the walls. I hadn’t yet seen fifteen snows, but already my name was repeated about the council fires.”

Balthus involuntarily recoiled, staring. It seemed incredible that the man walking tranquilly at his side should have been one of those screeching, blood-mad devils that poured over the walls of Venarium on that long-gone day to make her streets run crimson.

“Then you, too, are a barbarian!” he exclaimed involuntarily.

The other nodded, without taking offense.