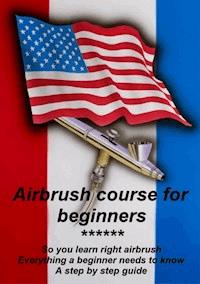 The author has written this Airbrush Course especially as an e-book for airbrush beginners from the view of a person wanting to learn through self-study without prior knowledge easily and quickly airbrushing. The guide shall help any interested person to avoid numerous costly rookie mistakes. The right choice of airbrush and the design of the workplace will be described exactly and in full details. Also the course will present all necessary materials. Thus, the beginners can get a quick overview of the matter without many research work and which protect them from bad investments .After presenting the material, the first practical tasks especially made for beginners will follow. Thus the airbrush beginners will go through all phases of the course: From the dot to the line to colored surface gradients, first objects just to the whole image .All tasks will exactly described step by step, and they will be explained by means of colored illustrations .After he has completed the course the Airbrush beginner shall be capable of independently brush first works. In addition to the course you can find the best materials at: www.airbrushnewart.de. 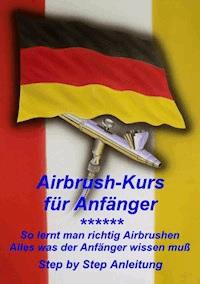 So you learn right airbrush

A step by step guide

Why this airbrush course is so important to you.

Well, around 10 years ago, I came by chance to airbrushing.

I had built a car model. After its completion, it came to the final coating. I once heard that a painting would be possible with a paint spray which I had bought in Ferrari red. And off we went. Only the result was kind of disappointing that I had everything washed off immediately.

Although I have been painting since my school days, I never had contact with airbrush.

But I had heard the word before. From a gut feeling, I drove to a department store and visited the model department. First, I had a look-around in the store. I also had found a large variety of airbrush models of a renowned model manufacturer. But I didn’t want to buy no airbrush without consulting. After plenty of time had passed, actually a non-specialist salesperson appeared; yes there are actually such people.

The non-specialist salesperson then proposed all models available to me, which would be all excellent. Well, I decided to buy an airbrush in a box with the corresponding model paints and accessories. The corresponding airbrush power socket was intended as an air source for the airbrush (there are no worse and more costly solutions).

Once home, I studied quietly my new acquisition.

After my approach was theoretically clear, I began to practice.

I plugged the airbrush to the power box and filled the almost creamy color, which should be supposedly used in that manner, in the color glass.

It bubbled so beautiful in the color glass, but out of the airbrush came nothing, nothing at all. So I'd read through the instructions again. And it was still written there, the color should be used as supplied.

Well, from the gut feeling I diluted the color a little and something was happening. The airbrush sprayed a little color. But after a few minutes, the whole fun was over. What had just happened? The so-great airbrush power socket was empty after I had not even begun.

So I drove back into town and bought a very expensive airbrush power socket again. The same game has been repeated. Now I was completely frustrated.

At that time, I had no internet and did not know where I could find information about airbrush accessories. I did however become aware that a compressor could help here.

No sooner said than done. I went to a hardware store and got informed without consulting a non-specialist salesperson. I then decided to buy a model for a lot of air, plenty of air, i.e. a 20 liter compressor. At the hardware store I’d got the unit running again, and found the noise level tolerable.

That was a big mistake. Once at home, I put on the compressor.

Now I realized that I needed a reduction of approximately 1 inch to about 7 mm for the air connection between airbrush and compressor.

Well you certainly will slowly get aware why I am offering you this course.

So I returned to the city, to the hardware store and nothing, the non-specialist salesperson had no idea. So I have visited five air plug shops, i.e. tool shops, until I got the right thing.

Well great, now we could at last get started. What a trouble and expense I have taken on me and what time does all this had cost?

After I connected everything, I had got the compressor running.

For heaven's sake, what this device made for a hell of a noise. At the hardware store the whole thing was bearable, but in my basement no more.

Well, with 20 liters of air stock you might as well airbrush for some time. Thus, the compressor does not start so frequently. Ultimately, it was only a compromise.

Then I airbrushed the model in Ferrari red. In this Airbrush set there was also a small instruction booklet. In it was shown what to make or paint with an airbrush. I then copied some exercises with this model paints (solvent based), which are completely unsuitable.

That's what I've done then. I'd been thinking where to get help.

In a well-stocked bookstore / newspaper stand, there would be certainly something about airbrushing. Hit: In a Station bookstore I then found it.

I had then my first airbrush magazine in my hands. I think I had it almost memorized. Here I was right. And what it all contained.

Conclusion: I did everything wrong. I had thrown my money out of the window by total, due to my mispurchases. Airbrush, color and compressor were all garbage.

Here I found an ad of a color and airbrush accessories dealer, in a city in central Hessen. Then, I examined the shop and got advice from an expert, who later turned out to be a non-specialist salesperson.

I've then bought another airbrush, which was crap again.

But I had acquired the right airbrush paints, acrylic water-based paints.

Well so it goes. I already went in large steps towards an airbrush career. With the wrong airbrush and the right color but it was now going steep upwards. After I bought little by little professional equipment, nothing stood in my way of success.

In order to avoid all these errors, I wrote this airbrush course for self-study

Anyone who has the opportunity to set up their own space has optimal conditions. If that workplace also has a window to the north-northeast, the conditions are very well. With light coming from north-northeast, one has the most neutral daylight. Of course, any other room or part of a room can be used for an airbrush corner. But in no case the living room (because of the fine dust)

As an additional light source you should use artificial light which imitates the sunlight closely as possible. The ceiling mounting of the light source should be chosen in a matter that if one takes the airbrush in hand across the table as few shadows as possible are created.

The traditional easel can also serve as a working place. Here, however, one needs additional storage space for all your utensils. I made myself a work table with a rotatable disk.

With some craftsmanship that is no problem.

Thus, I can turn the countertop in the required angle.

An old desk or a simple tabletop suffices for the initial course.

Only when you are sure that you frequently do airbrush as a hobby, you should set up the workplace as ergonomically and orthopedically as it could be. Your body will thank you with pain-free working.

For the airbrush a shelf bracket should be directly attached to the table, near your working hand, i.e. the hand with which you will brush. All other utensils and tools (which are dealt with later) should be placed within reach. A height-adjustable swivel chair is also recommended.

The compressor should be set aside of or beneath the table. The airbrush colors which I present afterwards are solvent-free, water-dilatable acrylic paints. The colors dry water resistant, so they cannot be removed with water.

But with airbrush cleaner. The colors are considered non-toxic. When you airbrush, fine dust arises because the color is sprayed. Here, everyone has to decide for himself whether he will use a respirator or not, according to the motto “What I did not even breathe, can not harm me." Who still uses old solvent-based colors should definitely use a respirator. The room should also be adequately ventilated.

Modelers who airbrush colors in large quantities should consider purchasing an exhaust system.

The airbrush is of course the most important device that is required.

Before buying the airbrush you should consider which requirements it shall meet, which airbrush you need and what ambitions or claims you have to yourself.

A few years ago there were many German manufacturers with high quality branded appliances. This market has shrunk now to a few companies. However, these produce excellent devices.

The market is swamped with cheap devices from the Far East. Exceptions are two excellent Japanese brands. These devices cost about € 100, - to € 400, -. If you want to airbrush in the long term, you should definitely get branded devices. Here, quality is assured.

In addition, you will always get replacement parts, such as needle and nozzle, etc., and have the customer-service for any questions and repairs.