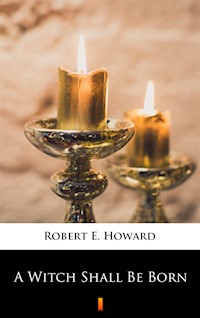 A Witch Shall Be Born ebook

Taramis, Queen of Khauran, awakened from a dream-haunted slumber to a silence that seemed more like the stillness of nighted catacombs than the normal quiet of a sleeping place. She lay staring into the darkness, wondering why the candles in their golden candelabra had gone out. A flecking of stars marked a gold-barred casement that lent no illumination to the interior of the chamber.

I. THE BLOOD-RED CRESCENT

II. THE TREE OF DEATH

III. A LETTER TO NEMEDIA

IV. WOLVES OF THE DESERT

V. THE VOICE FROM THE CRYSTAL

I. THE BLOOD-RED CRESCENT

TARAMIS, Queen of Khauran, awakened from a dream-haunted slumber to a silence that seemed more like the stillness of nighted catacombs than the normal quiet of a sleeping place. She lay staring into the darkness, wondering why the candles in their golden candelabra had gone out. A flecking of stars marked a gold-barred casement that lent no illumination to the interior of the chamber. But as Taramis lay there, she became aware of a spot of radiance glowing in the darkness before her. She watched, puzzled. It grew and its intensity deepened as it expanded, a widening disk of lurid light hovering against the dark velvet hangings of the opposite wall. Taramis caught her breath, starting up to a sitting position. A dark object was visible in that circle of light–a human head.

In a sudden panic the queen opened her lips to cry out for her maids; then she checked herself. The glow was more lurid, the head more vividly limned. It was a woman’s head, small, delicately molded, superbly poised, with a high-piled mass of lustrous black hair. The face grew distinct as she stared – and it was the sight of this face which froze the cry in Taramis’s throat. The features were her own! She might have been looking into a mirror which subtly altered her reflection, lending it a tigerish gleam of eye, a vindictive curl of lip.

“Ishtar!” gasped Taramis. “I am bewitched!”

Appallingly, the apparition spoke, and its voice was like honeyed venom.

“Bewitched? No, sweet sister! Here is no sorcery.”

“Sister?” stammered the bewildered girl. “I have no sister.”

“You never had a sister?” came the sweet, poisonously mocking voice. “Never a twin sister whose flesh was as soft as yours to caress or hurt?”

“Why, once I had a sister,” answered Taramis, still convinced that she was in the grip of some sort of nightmare. “But she died.”

The beautiful face in the disk was convulsed with the aspect of a fury; so hellish became its expression that Taramis, cowering back, half expected to see snaky locks writhe hissing about the ivory brow.

“You lie!” The accusation was spat from between the snarling red lips. “She did not die! Fool! Oh, enough of this mummery! Look–and let your sight be blasted!”

Light ran suddenly along the hangings like flaming serpents, and incredibly the candles in the golden sticks flared up again. Taramis crouched on her velvet couch, her lithe legs flexed beneath her, staring wide-eyed at the pantherish figure which posed mockingly before her. It was as if she gazed upon another Taramis, identical with herself in every contour of feature and limb, yet animated by an alien and evil personality. The face of this stranger waif reflected the opposite of every characteristic the countenance of the queen denoted. Lust and mystery sparkled in her scintillant eyes, cruelty lurked in the curl of her full red lips. Each movement of her supple body was subtly suggestive. Her coiffure imitated that of the queen’s, on her feet were gilded sandals such as Taramis wore in her boudoir. The sleeveless, low-necked silk tunic, girdled at the waist with a cloth-of-gold cincture, was a duplicate of the queen’s night-garment.

“Who are you?” gasped Taramis, an icy chill she could not explain creeping along her spine. “Explain your presence before I call my ladies-in-waiting to summon the guard!”

“Scream until the roof beams crack,” callously answered the stranger. “Your sluts will not wake till dawn, though the palace spring into flames about them. Your guardsmen will not hear your squeals; they have been sent out of this wing of the palace.”

“What!” exclaimed Taramis, stiffening with outraged majesty. “Who dared give my guardsmen such a command?”

“I did, sweet sister,” sneered the other girl. “A little while ago, before I entered. They thought it was their darling adored queen. Ha! How beautifully I acted the part! With what imperious dignity, softened by womanly sweetness, did I address the great louts who knelt in their armor and plumed helmets!”

Taramis felt as if a stifling net of bewilderment were being drawn about her.

“Who are you?” she cried desperately. “What madness is this? Why do you come here?”

“Who am I?” There was the spite of a she-cobra’s hiss in the soft response. The girl stepped to the edge of the couch, grasped the queen’s white shoulders with fierce fingers, and bent to glare full into the startled eyes of Taramis. And under the spell of that hypnotic glare, the queen forgot to resent the unprecedented outrage of violent hands laid on regal flesh.

“Fool!” gritted the girl between her teeth. “Can you ask? Can you wonder? I am Salome!”

“Salome!” Taramis breathed the word, and the hairs prickled on her scalp as she realized the incredible, numbing truth of the statement. “I thought you died within the hour of your birth,” she said feebly.

“So thought many,” answered the woman who called herself Salome. “They carried me into the desert to die, damn them! I, a mewing, puling babe whose life was so young it was scarcely the flicker of a candle. And do you know why they bore me forth to die?”

Salome laughed fiercely, and slapped her bosom. The low-necked tunic left the upper parts of her firm breasts bare, and between them there shone a curious mark–a crescent, red as blood.

“The mark of the witch!” cried Taramis, recoiling.

“Aye!” Salome’s laughter was dagger-edged with hate. “The curse of the kings of Khauran! Aye, they tell the tale in the market-places, with wagging beards and rolling eyes, the pious fools! They tell how the first queen of our line had traffic with a fiend of darkness and bore him a daughter who lives in foul legendry to this day. And thereafter in each century a girl baby was born into the Askhaurian dynasty, with a scarlet half-moon between her breasts, that signified her destiny.

“Every century a witch shall be born.” So ran the ancient curse. And so it has come to pass. Some were slain at birth, as they sought to slay me. Some walked the earth as witches, proud daughters of Khauran, with the moon of hell burning upon their ivory bosoms. Each was named Salome. I too am Salome. It was always Salome, the witch. It will always be Salome, the witch, even when the mountains of ice have roared down from the pole and ground the civilizations to ruin, and a new world has risen from the ashes and dust–even then there shall be Salomes to walk the earth, to trap men’s hearts by their sorcery, to dance before the kings of the world, to see the heads of the wise men fall at their pleasure.”